What does Shibumi mean?


Shibui (渋い) (adjective), shibumi (渋み) (noun), or shibusa (渋さ) (noun) are Japanese words which refer to a particular aesthetic of simple, subtle, and unobtrusive beauty. Like other Japanese aesthetic terms, such as iki and wabi-sabi, shibui can apply to a wide variety of subjects, not just art or fashion.


Shibumi is a Japanese word that means 'effortless perfection'. Anything that is Shibumi is quiet in refinement, noble and fulfilling in a manner that is not shaped exclusively by analytical thought.

In Japanese culture, Shibumi implies 'a simplicity of spirit; an attitude of refinement without pretension, honesty without apology, beauty without artifice. Western mystics try to attain or achieve a state of inner peace, but shibumi must be found, not won.'

Shibumi is understanding rather than knowledge, it is harmony in action. In art, it is understated beauty, articulate brevity. In philosophy, it is spiritual tranquility that is not passive; it is being without the angst of becoming.

The kanji or character for shibumi has many meanings. The term may describe the subtle and elegant patterns of a fine kimono. Or the effortless grace of a bird in flight. A shibumi flower arrangement brings into being coolness during a scorching summertime and sunshine on a frigid day It may describe an action done with effortless perfection.

Shibumi is a Japanese concept that suggests complete harmony, tranquility, and balance. It is "eloquent silence" and "understanding, rather than knowledge."

The following excerpt is from Shibumi by Trevanian. Published by The Ballantine Books, New York. Copyright C 1979 by Trevanian.

"Will you feel lonely in Japan?"

Nicholai considered for a second. "Yes."

"No, not often. Once a month. But you must write to me as often as you feel the need to. Perhaps you will be less lonely than you fear. There are other young people studying with Otake-san. And when you have doubts, ideas, questions, you will find Otake-san a valuable person to discuss them with. He will listen with interest, but will not burden you with advice." The General smiled. "Although I think you may find one of my friend's habits of speech a little disconcerting at times. He speaks of everything in terms of Go. All of life, for him, is a simplified paradigm of Go".

"He sounds as though I shall like him, sir."

"Shibumi, sir?" Nicholai knew the word, but only as it applied to gardens or architecture, where it connoted an understated beauty. "How are you using the term, sir?"

"Oh, vaguely. And incorrectly, I suspect. A blundering attempt to describe an ineffable quality. As you know, shibumi has to do with great refinement underlying commonplace appearances. It is a statement so correct that it does not have to be bold, so poignant it does not have to be pretty, so true it does not have to be real. Shibumi is understanding, rather than knowledge. Eloquent silence. In demeanor, it is modesty without pudency. In art, where the spirit of shibumi takes the form of sabi, it is elegant simplicity, articulate brevity. In philosophy, where shibumi emerges as wabi, it is spiritual tranquility that is not passive; it is being without the angst of becoming. And in the personality of a man, it is . . . how does one say it? Authority without domination? Something like that."

Nicholai's imagination was galvanized by the concept of shibumi. No other ideal had ever touched him so. "How does one achieve this shibumi, sir?"

"One does not achieve it, one . . . discovers it. And only a few men of infinite refinement ever do that. Men like my friend Otake-san."

"Meaning that one must learn a great deal to arrive at shibumi?"

"Meaning, rather, that one must pass through knowledge and arrive at simplicity."

From that moment, Nicholai's primary goal in life was to become a man of shibumi; a personality of overwhelming calm. It was a vocation open to him while, for reasons of breeding, education, and temperament, most vocations were closed. In pursuit of shibumi he could excel invisibly, without attracting the attention and vengeance of the tyrannical masses.

Kishikawa-san took from beneath the tea table a small sandalwood box wrapped in plain cloth and put it into Nicholai's hands. "It is a farewell gift, Nikko. A trifle."

Nicholai bowed his head in acceptance and held the package with great tenderness; he did not express his gratitude in inadequate words. This was his first conscious act of shibumi.

Although they spoke late into their last night together about what shibumi meant and might mean, in the deepest essential they did not understand one another. To the General, shibumi was a kind of submission; to Nicholai, it was a kind of power.

Both were captives of their generations. 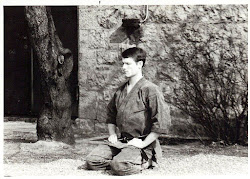 Kelvin D. Meeks
This blog serves as my research notebook for a variety of topics that are of interest to me.

To Hear One Hand Clapping...